Hey everyone – I’ve been getting steady traffic and requests from visitors about the Syma S107G controller I’ve alluded to in earlier posts, so I guess it’s about time to write it up properly. Here we go…

Way back in December, 2012, I posted a write-up of the reverse engineering work I did on the control protocol used by the cheap $20 Syma S107G infrared helicopters that are pretty popular at the time.  I guess it turns out they are still pretty popular as the Hackaday post still generates regular traffic to my blog – and a steady stream of emails from other curious makers interested in these awesome choppers.

Before I started reversing the protocol myself, I built a rudimentary controller to learn about how to implement other hacker’s descriptions of the IR protocol used by the S107G. It wasn’t very good, but it did teach me a lot about the importance of writing efficient code for the Arduino and some of the pitfalls of generating communication signals with microcontrollers. After playing around with the controller with my colleagues, I revisited the design of it to clean it up and start exploring how you might be able to pull off some fun stuff – thus the Dual-Channel Multiplexing Controller was born!

An Overview of the Controller

I think that the controller makes for a fun and relatively straightforward project for people interested in playing with robots/remote control vehicles – and more importantly it’s got potential to be the basis for some pretty cool projects in the future. Here’s the breakdown on how it works:

What does the Dual-Channel Multiplexing Controller actually do?

The control method – using the keyboard – is definitely NOT ideal (particularly for two-people at once!), in fact, it’s a real pain in the arse, but this is more of a proof-of-concept for a bigger project that I’ll explain later.

It’s important to note that all of the issues with this method of controlling the heli(s) has nothing to do with the controller itself, just the limitations of having to design a way to control the helicopters with a keyboard.

How to use the Controller

The controller consists of 3 major parts: 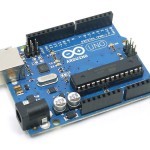 An Arduino UNOr3 (flashed with the sketch below). 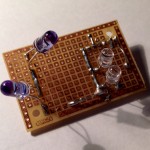 A super-simple “IR Shield” consisting of a couple super-bright IR LEDs and a couple of status LEDs. 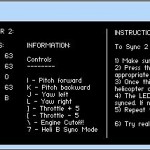 A Windows app for controlling the heli(s) written in Processing.

Assuming you have all the parts above, here’s how to get the thing going:

I’ll say up front, flying these things with a keyboard is …sub-optimal at best. Here are some tips on how to get the choppers off the ground:

The controller hardware is super simple – just an Arduino UNO and a few LEDs. As I’ve been playing with IR a fair bit, I wanted something a little more robust so I put the LEDs and a couple status LEDs on some Veroboard with some pin-header – we’ll (very generously) call it the “IR-Shield” 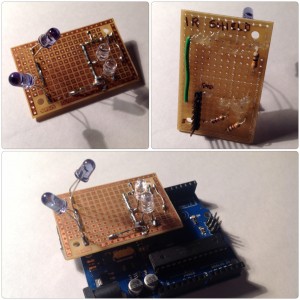 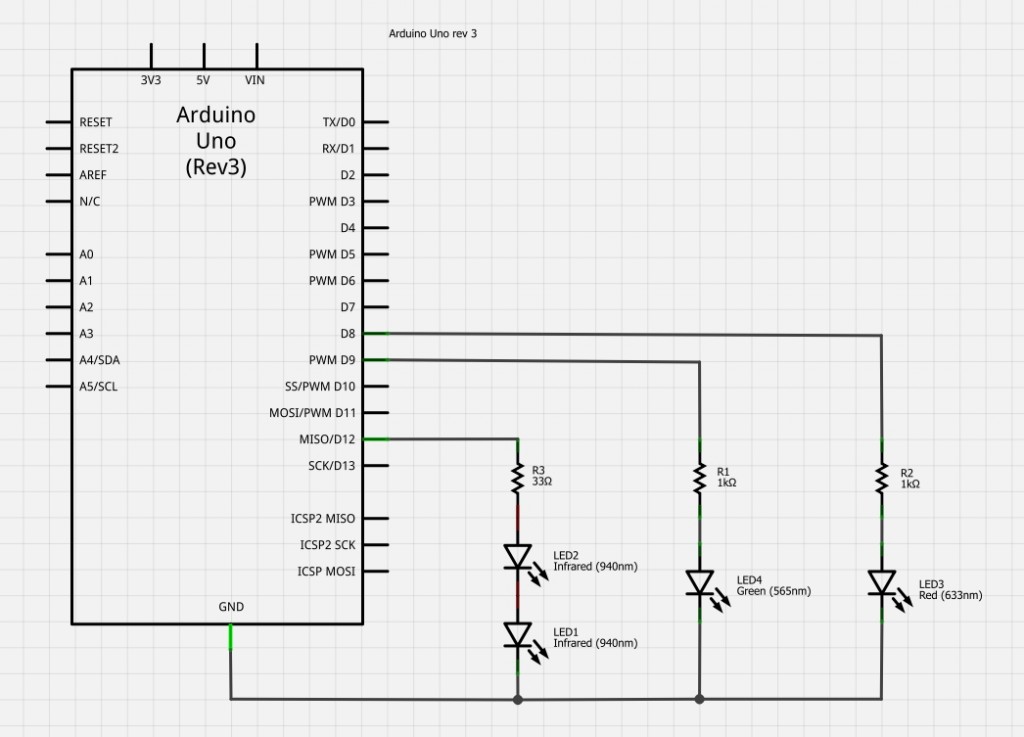 A few notes on the design:

The design goals of the Arduino controller sketch were as follows: 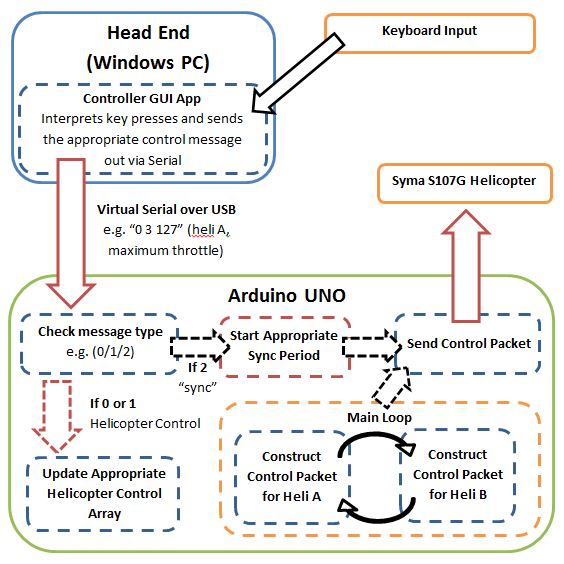 This design satisfies the requirements as follows:

All you have to do to interface with the controller from any head-end application you want is to send a message sequence consistent with the following table via the Serial connection. Each message should be sent on a consecutive line: 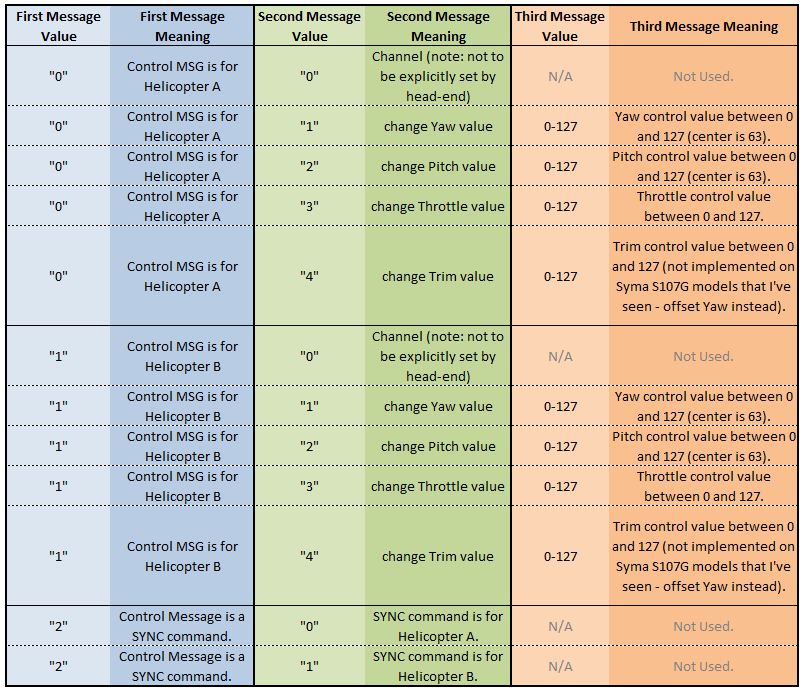 An example of a control sequence from the head-end might be:

The controller app is written in Processing and uses the ControlP5 GUI library for windowing, etc… The application is very simple and can be split up into 3 major parts: setting up and rendering the GUI, setting up the key-press event listeners, and the subroutines for sending the control updates to the Arduino.

The GUI is super simple – I experimented with having sliders for helicopter control, but it is SO clunky that it’s suicidal. One of the major things was that without some sort of feedback and a PID control routine for maintaining a steady altitude, controlling the other flight axes with GUI controls is far too slow to not crash and burn pretty quickly. So the GUI ended up as instructions and a basic set of feedback on what the current control values are.

The input mechanism ended up being a mixture of aggregating key presses (for things like the throttle where granular control is important), and toggling key presses (for things like Yaw and Pitch, where the keyboard is too clunky for granular control). Aggregate controls either add or subtract from the current control value. Toggle controls just jump to a preset value when pressed, and back to the center value. Ultimately, it turns out that the keyboard ROYALLY SUCKS for piloting helicopters – this is why I had to have an emergency engine cut-off key.

Using the Serial library, we can very simply communicate with the Uno and send the control messages in the format described above. As the coupling between the head-end and the controller is asynchronous and loose, this is basically all we have to do – nice and simple!

I hope this has been informative and useful for anyone interested in playing with Arduinos and these awesome helicopters. The control scheme design is very flexible and can be implemented with all sorts of head-end applications. I’ve toyed with the idea of autopilots, flight paths, choreographed flights with 2 heli’s – all of which are possible (with varying degrees of complexity). The controller communication scheme means that in these projects, sending commands to the helicopter is all but taken care of.

If anyone wants to give it a go and has any trouble, please don’t hesitate to pick my brain in the comments. Stay tuned for more reverse-engineering fun.